Today started at the nature center at the Royal Botanical Garden. 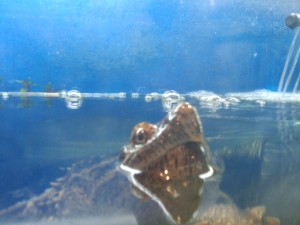 Snapping Turtles are an edge experience

We had 39 people register for our day long workshop.  The morning was about Brain Patterning and the Core Routines of nature connection.  The afternoon was an experiential session outside.

Right off the bat a young woman came up to me with and told me that her dad had come to the talk the night before, “Thank you so much,” she said, “He told me it had a really big impact on him”.

I saw my young friend with the sit spot Zine, he was there for the day as well.  He approached me as well and said “It meant a lot to me to tell you my stories, thank you for listening and inviting me to come back and be a part of this”.  Big smiles all round.

An older woman came up to me and said that she was part of the Whole Child School. She told me that what I was talking about is exactly the curriculum they are creating for children.  They have been working on starting up this school for four years, and finally opened it up for registrations.  600 people applied.

It’s time for a new and bold approach to raising our children.  We are the cultural creators of our child’s future.  If we don’t step up and raise our children, someone else will.

Themes from the talk:

Learning is a product of how Brain’s create Patterns. 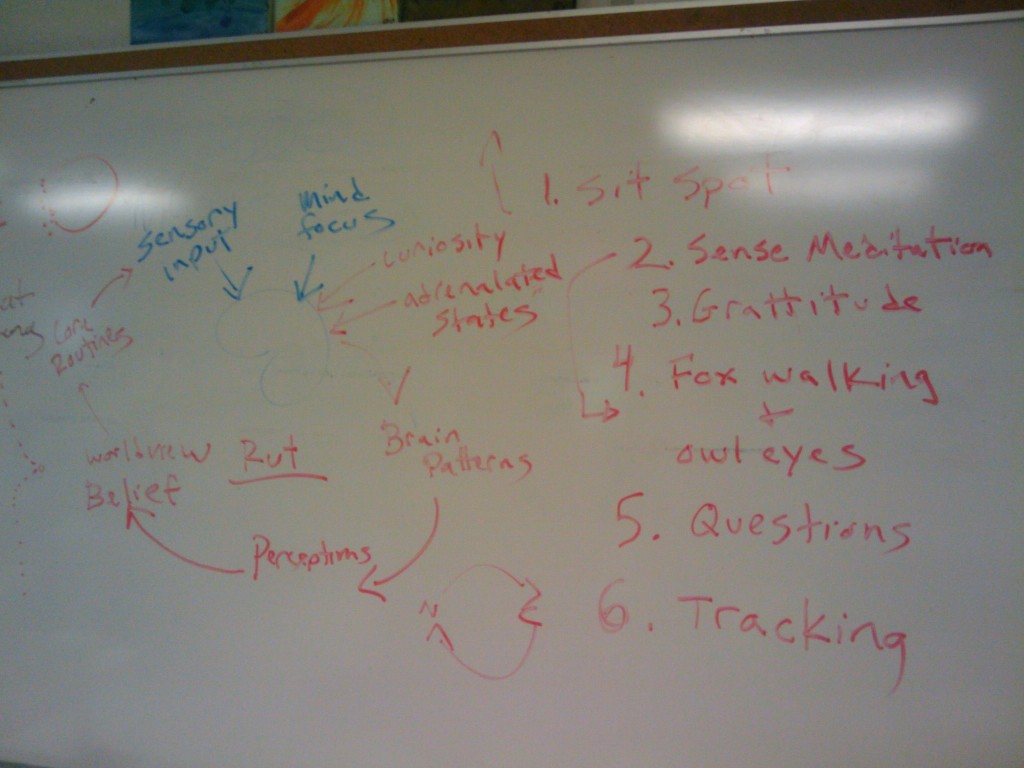 The Brain Pattern Cycle and the introduction of Core Routines

For example I grew up in a suburban environment and played on my lawn everyday.  I played on other peoples lawns.  I was soaking in a lawn culture.  A few years ago, if you asked me if robins existed in the neighborhood I grew up in, I would have to say “No”.  I look back, no memories of Robins.  Nope.  None.  Instead of considering that I may have a blindspot, or that perhaps its something I didn’t know, and didn’t know I didn’t know it, I simply believe that “There were no Robins, because I have no memory of them”.  That forms a belief that they don’t exist there.  I might make up a few things to support that, like,”my friends didn’t see them either.  Neither did my parents or anyone in my family.  Nobody talked about robins, let alone birds.  Nope, not there.”

I think what drives that is a need to be right about my reality, to know something, to be safe.

Down the line someone introduced me to Robins.  “look at that bird !”  “listen to that sound !”  “do you hear it ?”  “What colors do you see ?” “Can you imitate what it sounds like ?”  These kinds of questions stimulated new brain patterns for me.  They made me curious.  The excitement of my mentor made it even stronger.  The attention they placed on this bird, visually and aurally drew my mind to focus on it.

The rest of my life now includes Robins.  Pretty much anytime I see or hear a Robin now, there is a lawn nearby or it is on the lawn.  Robins are a product of lawn culture.  So what happened in my childhood ?  I guess Robins weren’t invented yet.  If they were there they must have been in the trees and hadn’t learned to sing yet.

Introducing the core routines of nature connection encourage new brain patterns, allowing nature to come into existence for me.  Literally.  I think you could say if I don’t perceive robins, and if I don’t believe they are there, and my behaviors reinforce that, then essentially they’re not.  What if I were a politician or  environmental regulator ?  What kind of decisions would I make on behalf of the robin /  nature, that basically didn’t exist for me ?

Here is some brain research that shows how all this can play out.

After this talk people went outside with nature connection mentors.  They had one rule: do not teach a thing.  No information.  The only plan they had was to be curious, ask questions and to listen, using the core routines as the vehicle for making connections with nature, bringing it into existence.

Some great things happened outside. Unexpected things.  One group discovered animal hair.  Long hairs and short ones.  The long ones were banded, light / dark, light / dark.  I asked “Did you bend the hairs to see what would happen?” She said, “No, I didn’t”.  “Was it straight or wavy ?”, I asked.  “Shoot, I don’t remember.  I…I…didn’t look”.

From there that group discovered a large kill site with “a hair pile the size of a pizza”.  But what really grabbed my attention, in a gross kind of way, is that they found a scat from the predator…with a whole paw in it. A skeleton hand !  When it comes to creating brain patterns, that’s down right fascinating.

The other group was just coming back from a sit spot and was given the errand to find a track.  Possibly a tree pattern, something in the landscape, water gulley, animal track, anything that can be considered a track. Someone in the group while exploring, saw a cottontail.  The group leader crow called people together and asked for the story of the day.  “Where did you see the rabbit ?” he said.  “Right over there” they said.  Everyone intently looked at each other with the silent question and a raised eyebrow, ‘should we go follow it ?’.  As they approached the place where the cottontail was last seen, in it’s place was a chocolate brown sleek animal, the size of a small house cat.  It bounded, hunted, stopped and looked on it’s hind legs. It bounded again.  They watched this alert and wily predator for at least 10 minutes. (Brain Research on people as natural explorers)

That night we drove into Toronto to present at the University of Toronto.

"Mark is a master of the deep journey. He is an artisan of culture who creates containers that encourage people to be creative and powerful. He understands deep nature connection and cultural mentoring in a way that very few people do." - Jon Young, author of Coyote's Guide and What the Robin Knows.
Ontario talk #2: Royal Botanical Garden, Burlington Ontario Talk #4: The big city of Toronto
Scroll to top