We were blessed with a weekend that was unusually warm for mid-January, with lots of wet snow on the ground to play with. The campers wasted no time doing what kids do best in the morning, and a snowball fight quickly became the morning game before opening circle! We laid out a few ground rules for snowballs right away so no one would get hurt, and then let them hurl snowball after snowball at the opposite side in a frenzy of flying snow and laughter. Talk about “child’s passions”! Tara, our newest camper, jumped instantly into the game with a huge smile on her face while her mother remarked, “This is so good for her. I don’t let her throw snowballs at home, but she always wants to, and look how much fun she’s having.”  I mentioned how we try to encourage the children’s natural passions and look for ways to mentor them while they’re having fun and engaged. 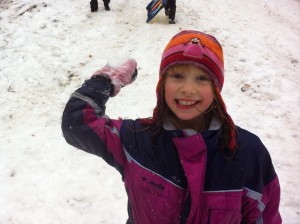 In our opening circle, we offered a thanksgiving address which brought us together, and then we talked about Hank and his passing and the sacred fire which was happening for him. We talked a little about elders and how important they are to us, and also about ancestors. Then we were off onto the land for a morning of fire building and winter tracking (and of course, more snowballs!).

The mammal clan searched for some fresh tracks in the snow, followed them around to see what they could learn, and then settled into the sandpit area to make a fire.

The heavy wet snow made fire-making a challenge, and the mammal clan learned some good lessons about starting a fire in a wet landscape. Their first two attempts failed, and finally they got a fire with the help of a giant pile of hemlock “whispys.”

The bird clan explored lowlands near the water where they learned how to make “feather sticks,” a great help for starting fires when everything is soaked. Their feather-stick fire lit on the second match! After some snack around the fire, they disappeared it and headed to the sandpit to meet the other clan for lunch and sledding. Jahnavi brought three sleds, and the sledding was a huge hit: again, the child’s passion in full effect!

After sledding, we all joined together as a village to build a quinzy! The snow was perfect packing snow for a quinzy, and everyone worked together to heap snow in a huge pile over our ad hoc armature, made of some plastic bins and all of our backpacks. Later, we pulled out the bins and packs to reveal the hollow interior of our quinzy. It was awesome and the kids were so excited about it! 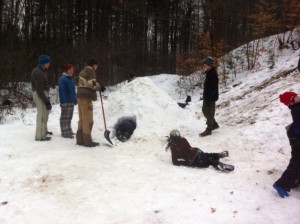 We headed down for closing circle and shared stories from the morning when the two clans were apart—mostly stories about trying to make fires with wet materials and the challenges of that. Then Dan, our visiting instructor, told a wonderful trickster story about Cat to us, and then it was goodbye for another month to the day-campers.

The night got off to a good start with a bonfire at the Mandan lodge and some hot chocolate—our goal was to dry off all our wet gear from the day’s adventures, and make sure we would be nice and dry and warm as night approached. We all stood around the fire, roasting our gloves and socks like marshmallows over the fire to dry them out and drinking cups of steaming hot chocolate.  Once we were all dried out and warm, we made a spaghetti dinner over the fire, cleaned up, and got ready for the night game. The night game featured a blindfolded drum-stalk, followed by the campers trying to rescue fellow-camper Julian, who had been captured by evil ghouls during the drum stalk. The ghouls were fierce and scary but eventually the campers managed to free their friend and get him safely back to camp! They were buzzing with stories about the game for long after!

Thankfully everyone stayed dry through the night and slept well, and awoke to a nice warm fire which Hyim helped to rekindle in the early morning. We had a nice leisurely breakfast and slowly greeted the day. Before long it was time to pack up and head back for the pickup. We got in a few more sled runs on our way down, and the kids rigged up the sleds to pull their gear down the hill to the school. So cool!

It was another good weekend in the woods at Coyote’s Path. Full of fun and adventure and connection with the forest and each other. Everyone at closing circle was looking forward to February.